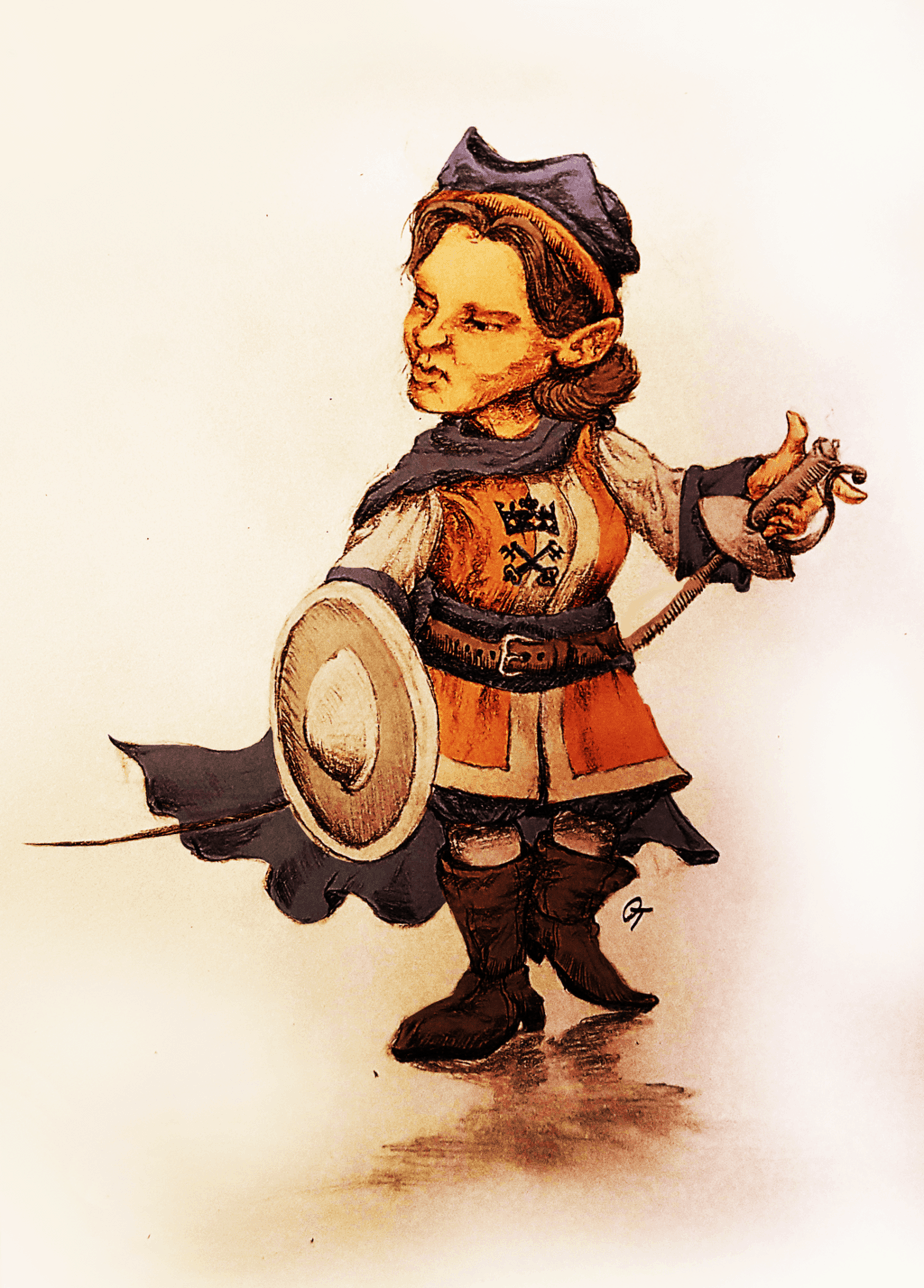 Gnomes are unassuming members of the “small” category of humanoid, not as threatening as a goblin nor as wily as a halfling. Their enlarged craniums might make them seem like living dolls, but it is within that oversized skull that gnomes house their most powerful weapon: their minds. As well shall see, the key to making an effective gnome character is to get the most out of that complex mind and that is no different when considering how to make a gnome into a fighter.

How to Make a Gnome Fighter

You can randomly generate your stats using the “4d6 drop the lowest” method described in the PHB or you can take the standard array of 15, 14, 13, 12, 10, and 8. Your highest score should probably be Dexterity since fighters excel at archery and two-thirds of all gnome subraces give you +1 to that score (Forest and Deep).

The rest of this guide will be written under the assumption that you are making an archer, but if you aren’t then go ahead and substitute any mention of Dexterity for Strength. After that, go for Constitution and then Intelligence. The purpose of constitution is obvious, as a fighter usually needs plenty of hit points, but also it helps you make concentration saving throws if you choose the Eldritch Knight subclass. I’ll go into subclass choice more later but in short, I recommend two subclasses of fighter in particular for gnomes: the Eldritch Knight and the Psi Warrior. Both require high Constitution and Intelligence to be effective so make sure to keep those scores high.

None of the three gnome subraces, Forest, Rock, and Deep, are bad for a fighter but none of them are especially good either. Their features are mostly ribbon abilities, which means that they’re neat but not especially useful. The gnome’s most useful feature is one that all of its subraces get: Gnome Cunning, a feature that grants advantage on all Intelligence, Wisdom, and Charisma saving throws against magic. That’s pretty beefy and thus the subraces are a little weak to compensate. Go for Forest or Deep if you want to focus on archery and go for Rock if you would prefer to focus on spellcasting; the respective subraces’ ability score increases will be the most helpful to you if you pair them well with your preferred playstyle.

As I mentioned before, the Eldritch Knight and Psi Warrior are my top picks for a gnome fighter. Both of them benefit greatly from the gnome’s +2 Intelligence and really the only thing distinguishing them as choices for you is your personal preference. If you want to be a spellcaster with a focus on evocation and abjuration magic, pick Eldritch Knight. If you want to be a warrior with lots of surprising tricks up your sleeves, pick Psi Warrior.

I slightly lean towards Psi Warrior because it’s new and exciting due to being exclusive to Tasha’s Cauldron of Everything, but I also think the visual of a gnome using their mind to create feats of great power and trickery is very on-brand for the race’s lore and personality. Again, it’s up to you.

How to Play a Gnome Fighter

To play the gnome fighter as we discussed so far, you need to play smart like the gnome is smart. Effective use of your limited resources is a must. Whether you go for Eldritch Knight or Psi Warrior, you are limited by your spell slots or psionic energy dice. Both classes have the potential to turn encounters upside down by using magic to its best effect but you’ll soon find yourself out of gas if you use these resources flippantly.

For example, burning all your spell slots on magic missile might get you in trouble if you really need a shield spell later; burning all your psionic energy dice on Psionic Strikes might be a problem if you really really need to move an object using Telekinetic Movement later. One thing I will say is that the Psi Warrior’s features don’t always require the expenditure of a die on the first use per short/long rest, so in that case, the features are more readily available than spells are… generally speaking. Still, use your head.

Outside of combat, a gnome fighter generally fills a similar role to a party’s wizard as they are probably quite capable of researching arcane lore and solving puzzles. Your class features generally don’t mesh super well with interacting with the environment, but your subrace features can help a great deal if you use them well. A forest gnome’s ability to speak to animals and a rock gnome’s ability to create nifty gadgets might seem weak but in the right scenario, they can change everything about a scenario or encounter that doesn’t require brute strength.

How to Roleplay as a Gnome Fighter

The Player’s Handbook says the following about gnomes on page 35:

Obviously, you’re allowed to create a dour or uninventive gnome, but if you go by this definition of the quintessential gnome spirit then something interesting happens when you cross it with the spirit of the fighter. The PHB states the following about fighters on page 70:

“Fighters learn the basics of all combat styles. Every fighter can swing an axe, fence with a rapier, wield a longsword or a greatsword, use a bow, and even trap foes in a net with some degree of skill. Likewise, a fighter is adept with shields and every form of armor. Beyond that basic degree of familiarity, each fighter specializes in a certain style of combat.”

What this tells me is that a gnome fighter should probably approach the issue of combat like a fun puzzle to be solved. If you’ve ever talked to a practitioner of HEMA (Historical European Martial Arts) then they’ll tell you that fighting using a medieval weapon isn’t just a case of having a high Strength score.

If you just swing your sword as hard as you can every time then you’ll probably telegraph your attack and miss horribly, not to mention throw yourself off-balance, which will just give your opponent time to counter-attack. Dueling in this context is like solving a mathematical problem where you’re trying to solve for the best efficiency possible: you learn the quirks of every weapon, how to use them both for sheer power and utility, switching in and out of offense and defense as fluidly as you can. Victory in battle is gratifying, but failure brings further opportunities for improvement. “Ok,” the gnome fighter thinks, “that went poorly. How could I do better next time? What was it that my opponent did that threw me off? Is my flying spin attack worth iterating on or should I start developing that helm splitter technique I thought of last week?”

Throwing spells and psionics into the mix increases the problem’s complexity tenfold, and assumedly the gnome fighter enjoys puzzling away at the problem that much more. Your fellow party members might think you overthink the problem of combat but your genius shines through in everything you do. Embody the spirit of creativity in your combat style, either honing a grim art of death or taking delight in just how silly you can make your attacks before they stop being useful. Who knows, you might end up teaching your beanpole friends a thing or two.