It’s not actually out of character for a Tiefling to become a paladin even if the deity they serve isn’t tall, dark, and evil or if they don’t choose to be an oathbreaker. When society turns its back on you perhaps there is a place you do have a purpose and a reason to have been born.

How to Make a Tiefling Paladin

There’s a couple of things that must be known when building a Tiefling. They aren’t succubus or incubus as rule 34 fanatics and people in need of a good “no-horny-bonk” claim. Neither are they well-loved but in fact, discriminated against.

If we were to base on the handbook, Paladins are limited to the good alignment with moral choices unless the character is an oathbreaker. Frankly, no player/s should be limited to following the rules to enjoy the game. So long as you are a fighter that is/was in service to a deity with an oath, the basics are. You don’t have to necessarily break your oath either if you want to be on the edgier side of the spectrum.

Like contracts that enslave you into crippling debt in reality there is a variety of oaths you can choose from:

Paladins have three best builds depending on which you want to be proficient:

How to Play a Tiefling Paladin 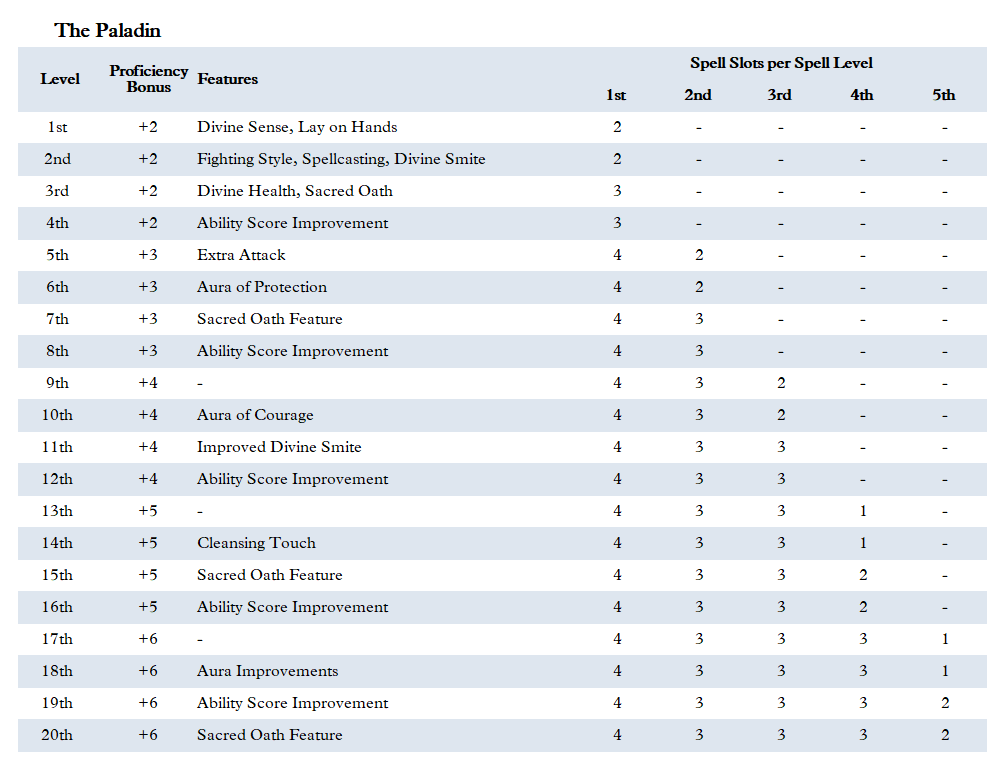 As Paladin, you get the advantages and (not limited to) the following features (see first chart above):

Think of a Tieflings as the counterpart of half-elves that got the shorter end of the stick. Tieflings face a lot of racism and discrimination regardless of whether they are evil or not. This has caused them to be very reserved, suspicious, and self-reliant loners. They have a quick temper, stubbornness, self-confidence, and fickleness in relationships. This does not limit them from working with others as they’d likely treat others in a contractual or work-type relationship. Fortunately, though, they will learn to reciprocate the trust given to them in a way. When they allow themselves to open up or give loyalty towards someone, that person/receiving a friend and ally for life.

How to Roleplay as a Tiefling Paladin

The topic of how Tieflings came to be is covered, but what of their lives? Like most hybrids, they have no land of their own or a place where their kind gathers. Tieflings are uncommon, and with the whole hot topic of Asmodeus, they are rarely friendly with their style or relatives. As mentioned before, racism and discrimination have been part of a Tiefling’s life since the day of their birth or creation. Even a Tiefling baby born to two human parents (where one so happened to have a Tiefling or Fiend blood in the lineage or the baby was cursed) would likely be abandoned and taken in by orphanages and churches, or crime rings.

Despite their strange form, their bodies are similar to humans, from weight and height (Maximum height for a male Tiefling is 6” 7, for a female 6” 5)  to the skeletal structure. On the other hand, life expectancy is similar to humans, but few can live 150 years. They can live on an omnivorous diet (like humans) but slightly lean more to meat. They can consume other stuff such as bone, gristle, marrow, blubber, blood, ash and can subsist on coal or inorganic rock. They at times even drink a cocktail of broth, oil, and sulfur. Tieflings can be both male and female, one of the other, or none at all. Some Tieflings can even pass as humans in appearance.

Similarities or not, so long as fiendish blood runs and features are evident, they are treated cautiously. With the rejection Tiefling faces, many turn to a life of crime or mischief, which has further prejudiced perspectives on them. Well, it’s not like it’d be easy to change others’ views or have someone advocate for them. So why bother changing society’s views?

Being a paladin isn’t always going on missionary and crusading trips. It’s similar to a warlock, but instead of a sugar daddy, you get the child-friendly version which is a sponsor. You don’t have to completely or even love the deity you are in service to as becoming a paladin comes for various reasons- unless the oath you take is the path of Devotion. You can be in it for just liking the deities’ cause, goal, or you’d like them to do or give you something in exchange within their power. For Tieflings, they aren’t very keen on looking up to a being of higher power unless that power impresses them. Perhaps the desire to be or at least feel accepted is why a Tiefling would pursue this path? To inherit the greatness of that deity?

It may be laughable for others that a creature of fiendish origin would be humbled, and perhaps if a Tiefling paladin serves an evil deity or becomes an oathbreaker, it would be unsurprising for them. Tieflings are individuals free to choose who and why they would serve even if it doesn’t fit the edgy stereotype. They are capable paladins, being notoriously known to be great at being bodyguards, mercenaries, assassins, and even their powerful voices famously heard in battle. Apart from that, you’ll be able to speak and write infernal despite not studying it or Abyssal along with Common language. Plus, you’re ambidextrous, which means you can register with both hands and even your tail- not a big deal to being a paladin but impressive as a skill.